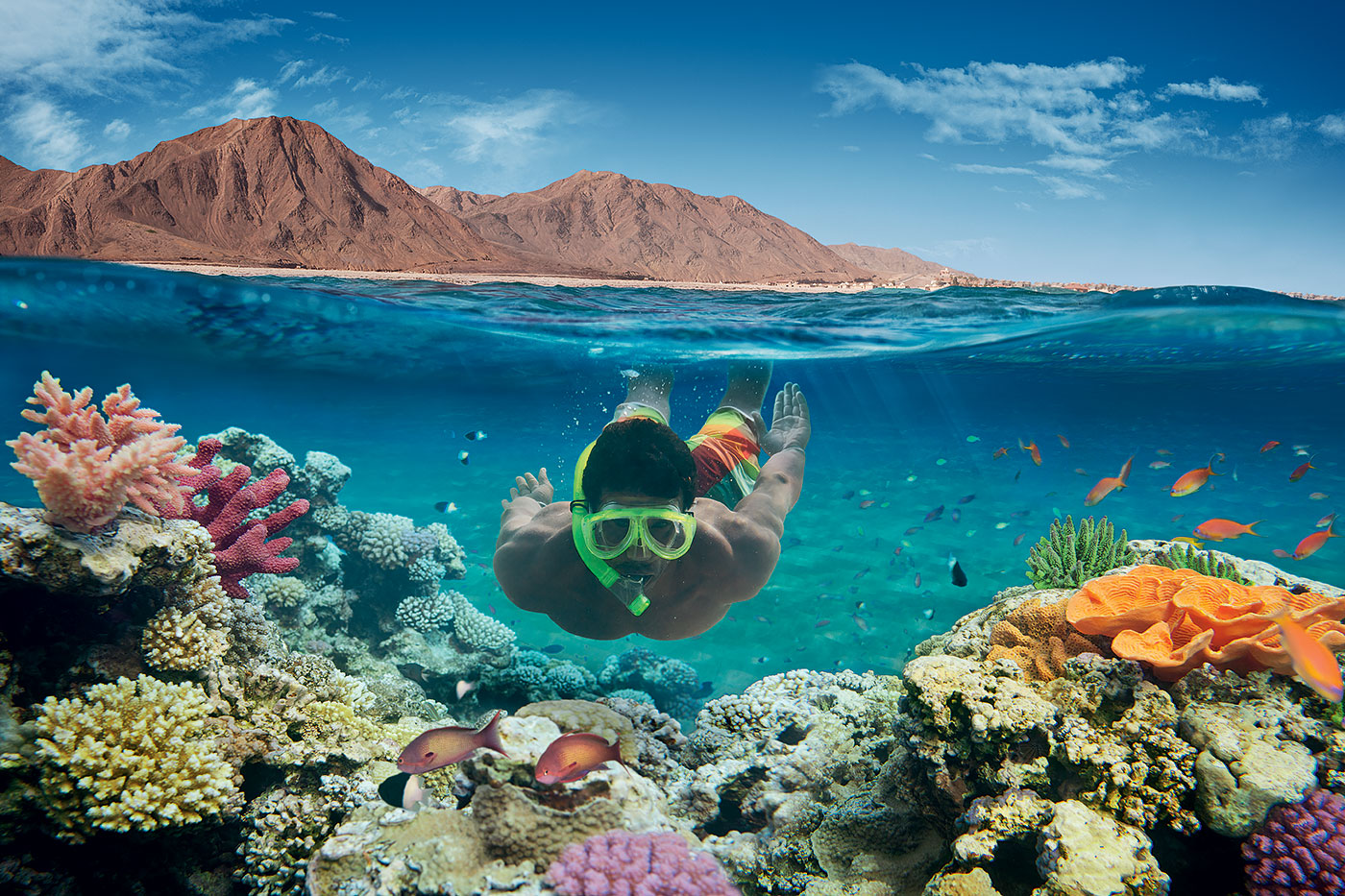 Are you one of the people who want to enjoy their holiday on the Sinai Peninsula actively? Sharm El-Sheikh could be an ideal opportunity for you , Even in the autumn months there is a lot to do in the famous resort, lovers of water sports, admirers of exotic animals and nightlife, Sharm El Sheikh is the closest destination to Europe where you can soak up sun, dive amazing corals reefs, and enjoy the sea any time you need a break from routine. The climate is lovely and dry all year long with temperatures ranging between 20° and 25° C in the winter months, whereas in summer the temperatures go up a little reaching highs of 30 to 35° C.

Sharm El Sheikh boasts the widest array of fun, exciting and even crazy water and extreme sports: besides diving, snorkeling, sailing, wind and kite-surfing, you can even try sky diving or parachuting from a helicopter on your next holiday in Sharm El Sheikh. Moreover, from Sharm El Sheikh, you can easily book trips and safaris into the nearby Sinai desert and discover the amazing St Catherine Monastery, or the majestic Sinai Mountains. You can also head to Sharm for a wellness and pampering holiday; the town is home to Egypt is most famous and professional Spas in Egypt. Add to that endless nights spent at local bars, nightclubs and beaches dancing the night away or the magic of an existing safari into the mountainous Sinai desert landscape and you will know why Sharm is ranked among the best vacation destinations in the world. Sharm El Sheikh has it all to make your holiday an unforgettable experience. Sharm El Sheikh is located on the Gulf of Aqaba, about 300 km from Suez and 19 km from Ras Mohammed National Park. Inside Sharm, Naama Bay is where the action is to be found whereas the Old Town is where you should head for your daily shopping and souvenirs. If you are in the market for some serenity Hadaba (near Ras Um Sid) would be your choice, here you find calm hotels and resorts. To explore the Ras Mohammed National Park and Nabq Protectorate, or to go on diving and snorkelling trips head down to the marina or to one of the town docking ports.

Egypt’s first protected area is a world-famous area with several top diving locations. it is a beautiful National Park locates 20km to Sharm El Sheikh, set up to protect marine and land wildlife and maintain the natural beauty of the area The area of Ras Mohammed is a cape formed by ancient corals; you can see those emerging on the surface of the sea. It is indisputably one of the most beautiful places in South Sinai. Due to currents carrying out of the Gulf of Aqaba, the underwater inhabitants of the area are simply exceptional and a lot of fish come here from the open seas in search of food and shelter: you’ll observe an unperceived abundance of hard and soft corals, as well as big schools of tunas, barracudas, jackfish and even sharks. Only to name a few, Shark and Yolanda reefs are ‘the’ Red Sea dive. Strong currents bringing in a wide variety of fishes made the spot one of the most perfect.

Ras Mohammed remains a timeless and pristine environment in which nature flourishes. For divers and snorkelers, the area is a paradise. Over 220 species of coral exist in Ras Mohammed National Park, as well as 1000 species of fish, 40 species of starfish, 25 species of sea urchins, more than a 100 species of molluscs and 150 species of crustaceans. In addition to these natural wonders, many wrecks are scattered around the sea bed here from the days when strong naval presences patrolled the area, considered to be strategically important because of its proximity to the Suez Canal.

Within a gorge of an extraordinary mountain range lays an extraordinary relic of the 5th century. A site of great religious significance, Saint Catherine’s monastery is one of the oldest working Christian monasteries in the world. The monastery is part of the wider Eastern Orthodox Church and has been dubbed a UNESCO World Heritage Site, or a place of substantial historical and cultural value, thus falling under the protection of international law. Located in South Sinai, Egypt, the monastery has become part of Saint Catherine City, a city that was literally built around the monastery, creating an amalgam between the old and the new. A collection of some of the earliest works of art in existence, the world’s oldest operational library, and the well where Moses first met his wife are a mere fragment of the astoundingly rich antiquities Saint Catherine’s has to offer. To crown the experience, you can witness, and even participate, in the mass held by some of the most devout monks in the country, surrounded by millennia-old artifacts in the Church of Transfiguration. Try to get a tour guide so you can take in as much as possible.

If the call to adventure beckons you, then perhaps you can take a day to climb the wondrous Mount Moses that lies adjacent to the city. Atop this stone behemoth is where many believe God spoke to Moses; a magnificent 2,000 foot-high view. There’s still so much to explore around the monastery too, so gear up, mount a stallion and trek through the desert with your own personal guide. Discover this spiritual beacon that withstood the erosive tests of time and human-kind.